How to choose from the widest portfolio of surface finishing?

How to correctly choose the surface finishing of printed circuit boards? Whilst previously it was just enough to protect the board against corrosion and the base for all adjustments was plain copper, customers nowadays are able to select from a wide selection of various options. There are ever increasing demands on a higher frequency, extended lifespan and generally better resistance of materials. New technologies also enable boards designers a higher thickness of joints and smaller distances between individual components. In Gatema, at this time only, six different options of surface finishing are being offered. Unleaded and leaded HAL, immersion silver, immersion gold, chemical tin or galvanic nickel and gold.

And each of those having its pros and cons. They differ in the thickness of the layer, maximum dimensions, ROHS compatibility, flatness, possibilities of multiple soldering, bonding by aluminium or gold or in lengths of its storage life, storability. „The increasing demands of our customers have been changing throughout the course of time. Most of our production still represents basic prototype boards, but simultaneously we add to our portfolio of surface finishes services in a way so that we are able to respond timely to the demands of the market. I dare to say that what is available to us is the widest portfolio of surface finishing. Currently the transfer to other types clearly seems to be the trend. Whether this is because of the development of 5G networks or because of work in difficult conditions” as Mr. Ondrej Horky adds, who is a Sales Manager at Gatema PCB company.

Let’s now made ourselves oriented across this entire issue and introduce facts on what individual  materials would be suitable for what use.

Immersion silver is best used in high frequency applications. Due to its lacking nickel, it perfectly carries signal. Silver is also a better carrier than gold or copper. Furthermore, the surface finish is then easily soldered because the thickness of the silver is only 0.1 µm. Thanks to its lower thickness, the board has better surface flatness and therefore immersion silver is suitable for higher construction classes with thin joints and gaps. “With the arrival of 5G networks, the use of immersion silver will apparently become mandatory. Hence, looking towards the future, this can be one of the major products in the portfolio of final surface finishing,” as Horky.

Leaded and unleaded HAL (Hot Air Levelling) is a process during which the printed circuits board is dipped into moltened solder and during the backward motion it is blown upon by air knives in a way so that it the solder is then blown out of the opening and out of the surface of the non-soldering mask. For most applications of the HAL method, an unleaded solder is used. Thickness and the structure of the surface depends on the surface voltage of the soldering iron and ranges somewhere in the neighbourhood from 2 to 40 µm. The dip means a dramatic temperature shock for the board connected with dissolving copper into solder and might simultaneously cause twisting or bending the printed circuit board itself. „Leaded HAL is practically not being used nowadays anymore, because it does not fulfill requirements upon the ROHS certification and contains some dangerous materials. On the other side there are fields and industries that hold an exception, typically these might be military industries but also other special applications. In our production, a meltage tin - lead in an approximate ratio 60:40 is being used” Mr. Ondrej Horky then describes.

Immersion gold (ENIG; Electroless Nickel Immersion Gold) comes out of the combination of nickel and gold. From a chemical point of view gold is ideal element for and upper cover off the board. Considering the fact that gold generally does not produce oxides, the temperature and storing conditions then have significantly lower influence upon the life span in comparison to other surface finishes. Gold is then during soldering dissolving into the soldering iron and the soldering iron  itself then creates the joint with the layer of nickel. ENIG is characterized by a large flatness of the surface, offers good conditions to be soldered, and also by a long storing period, therefore this surface adjustment is suitable for SMD technologies, for parts with a small spacing of outlets or for contacting. Among some of the disadvantages, these might include the diffusion of gold into the soldering alloy and at higher concentration, tendering of joints might occur and of its metallic characteristics (typically a higher contents of hypophosphate or a thicker layer of gold and its corrosion into the layer of nickel).  „PCB metalled with such technology will be recognized by its shining golden collar. The advantage is undisputably unleaded soldering and very good resistance against corrosion” as Mr. Ondrej Horky adds. 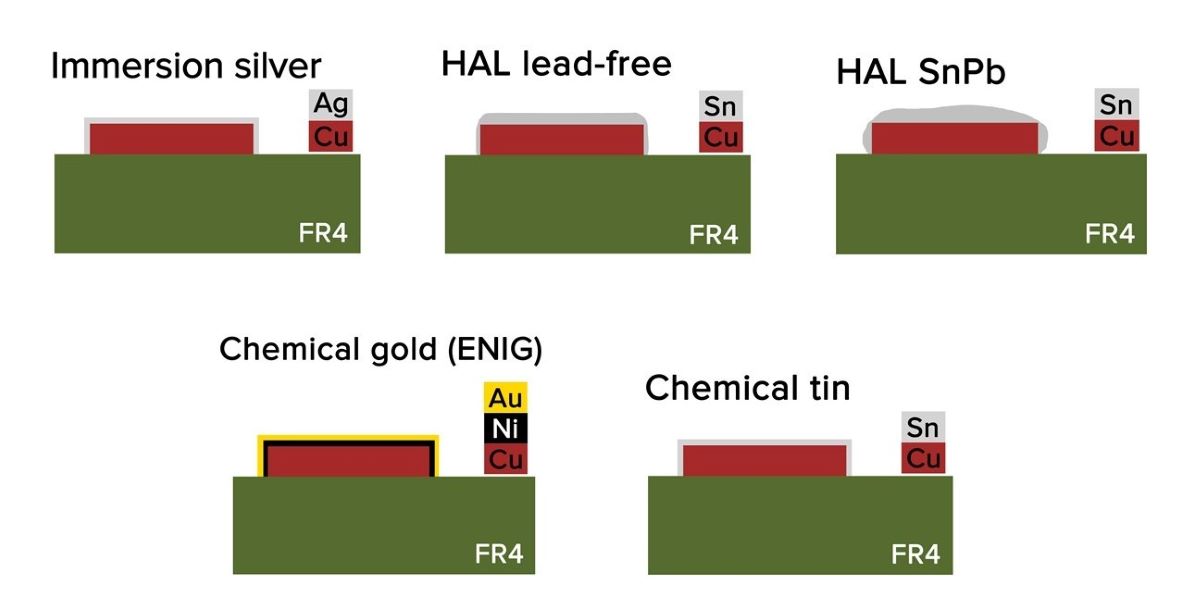 Chemical tin creates thin deposit of tin, usually within the region of 0.9 to 1.1 µm which protects the basic copper against oxidation and provides a highly solderable surface. „For its usage we deploy acid non-stream tin bath which prevents the creation of “whiskers” with its additives (non-guided creation of metal hair structures which then frequently cause hard short circuits) and is in vertical adjustment,” Mr. Michal Horni, an R&D Manager of Gatema PCB a.s. explains. Due to high sensitivity of immersion tin it is necessary to take good care when handling with it and strictly follow suitable storage conditions. In all steps of processing, only manipulation in gloves is recommended. The same as in the case of immersion silver you additionally need to count with a shortened time period of storage. Instead of the standard 12 months, in this case only 6 months at the most and a multi-step soldering the board must happen subsequently as soon as possible. Thanks to its flatness it is great to be used with the SMD technologies.

Such technological operation deposits 3 to 7 µm of galvanic nickel and 1 µm of galvanic gold. This is described as so called hard galvanic goldening.  In most cases this is used as a prediction for connectors and from all surface adjustments it is suitable for bonding with a wire.